I didn’t have much hope for Wonder Woman, considering the movies that came before. I touched briefly on Batman vs Superman, specifically how Zack Snyder’s desire to make superheros “grow up” ended up making his films feel bland and pointless. Wonder Woman takes the opposite tack and embraces everything that makes superheroes such wondrous fantasies.

Wonder Woman simply tells the story of a fascinating character with magical powers. It doesn’t stumble over itself trying to build a cinematic universe, or introduce extraneous characters to spin-off more movies. It simply concentrates on telling us the story of Wonder Woman, who she is and what she stands for.

Learning about Wonder Woman’s origins and watching her grow into her own as a superhero was a true pleasure to watch. Wonder Woman will make you smile, laugh, and yes, maybe even cry. If you’ve grown tired of dark antiheroes who are driven by pain and grief, then this is the film for you.

Wonder Woman is a hero driven by love, hope, and justice.

Wonder Woman is exactly the hero we need and deserve.

You need and deserve to see this film. 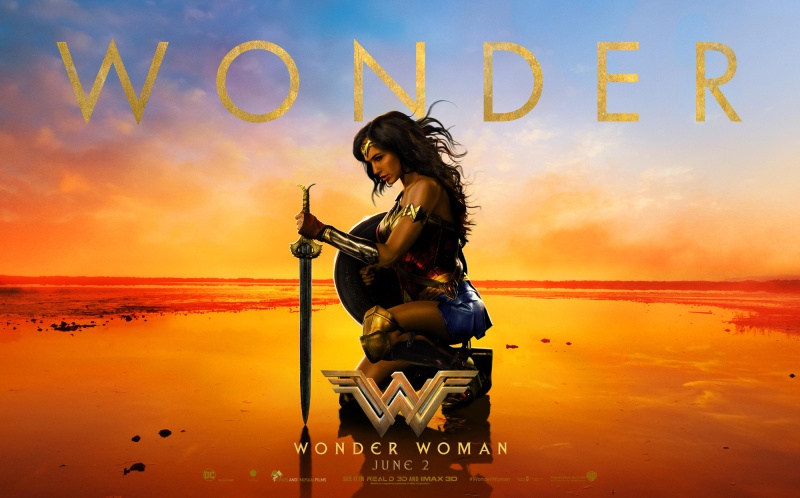 Most superhero movies begin with a tragedy: Batman’s parents dying, Superman’s planet exploding, Spider-Man’s uncle dying, and so on. For whatever reason, comic storytellers decided that only great tragedies and loss can breed great superheroes.

Wonder Woman is not one of those stories.

Instead Diana, the little girl who becomes Wonder Woman, begins like most children do: dreaming of becoming heroes that save the world. She’s a child who is driven by imagination and heroic aspirations, rather than fear and pain. This made Wonder Woman’s origin story infinitely more relatable to me because I used to be that child; I became a writer because I wanted to create characters just like this. Her desire to become one of the amazing Amazonian warriors she loved watching was incredibly endearing.

It’s easy to see why Diana wants to be an Amazon too: because they’re amazing.

The Amazon warriors are awesome to watch in action, you both see and even feel their power. There’s an unfortunate tendency for female heroes to engage in waifu, usually using a nimble and speedy martial arts. You rarely get to see them go all Hulk on people and start throwing bad guys through walls. These Amazons are definitely of the wall-shattering, bone-breaking, brute force school of superhero fighting. I’m over 300 pounds and six foot four inches tall, and any one of these Amazons could rip me in a half like a phone book.

The beach fight against the pre-Nazi German soldiers was incredibly well done, mostly because it was only a couple dozen combatants rather than a giant CGI army, so I could really appreciate the effort the actors were going through. It made it feel visceral, and the blows felt like they were having real impact. I only wish this scene had lasted longer, because I wanted to see Antiope kicking some more German ass.

My only qualm about the first act is that Wonder Woman reveals way too many of its mysterious elements right out of the gate. All within a few minutes of each other; Diana’s mother tells her about the war with Ares, Zeus’s creation of Diana from clay, and Zeus’s “Godkiller” that he left behind should Ares return. As a result I knew Diana was the Godkiller, and Zeus’s daughter, from basically the beginning of the film. If I had any doubts, they were wiped away when Diana’s mother tells Antiope:

“Train her hard, but she must never know what she is.”

It’s not a huge problem because there’s still plenty of surprises and nuance in how Wonder Woman tells its story, and the plot isn’t the important part of the film. Still I would have liked to have been kept in the dark a little more so I didn’t see the entire plot coming.

When Chris Pine shows to kickoff the second act, I have to admit I was afraid this was going to be James Kirk-lite: a smug, womanizing scoundrel. I had no idea that Chris Pine was this charismatic and talented, because his performance of Steve Trevor is amazing. Steve Trevor is an endearing character because there’s always this undercurrent of sadness running through him. The way he haltingly talks when the Great War is discussed marks him as a man who’s seen the madness of war.

Yet there’s also a charming naïveté to him as well in his interactions with Diana, which is also appropriate for the era. The scene with Wonder Woman and Steve as she tries to get him to, literally and not figuratively, sleep with her had me smiling the entire time. Her forthrightness and confidence played wonderfully with Steve’s hesitant and prudish outlook on romance. These two had such a genuine chemistry on screen that it made the movie simply glide through its sometimes clunky exposition about World War I. I absolutely adored how these two interacted, and in many ways these two carry the film on their shoulders by providing such a noble and heartfelt romance for the audience.

However, it’s still Wonder Woman that’s the beating heart of the film and it’s during her charge into no-man’s-land that she shine’s brightest. I’ve talked before the scene in Man of Steel where Superman hops casually over a tanker truck that Zod throws at him, allowing it to annihilate the building behind him; I hated that scene because it was utterly meaningless, and talked about how much better it would have been if Superman had thrown himself into the tanker to protect the people behind him. The scene of Wonder Woman in no-man’s-land is exactly the kind of scene I wish Superman had gotten; she throws herself into danger and allows the Germans to focus fire on her because she can take the hits.

Watching her brace herself behind her shield as the machine guns mercilessly pound way so that Steve and the others can flank around her sent chills up my spine. Her gold, red, and blue armor shimmering amid a sea of gray and black was also a great visual metaphor for the hope she brought the soldiers in the trenches. It was in the village, after the battle is over, that I thought the best writing got to shine though.

First of all this scene is a perfectly positioned transition from the second to third acts, allowing the film to transition from war film back into a superhero movie seamlessly. Secondly there are just so many great little moments here that add such nuance to the film. Wonder Woman asks what people do when there is no war, because she’s never experienced the world of men, and Steve struggles to answer because he can barely remember a time from before there was a war. But it comes back to him, here in the arms of this incredible woman, he can finally picture a world at peace. He’s no longer lost amid the horror and misery of war.

Steve isn’t the only one either. Her sniper companion, who didn’t fire a shot the entire battle due to his trauma and fear of killing again, begins singing in the bar. Steve comments that he hadn’t heard him sing in years, and as it begins snowing and Steve and Wonder Woman dance in it, I began to feel a real sense of camaraderie with this group of people. I was happy that they’d managed to find a small moment of peace amid one of the nightmarish wars ever fought (to be outstripped only by its big brother). Though I do wish more focus had been given to showing just how horrific and insane the first World War was, it’s probably for the best that they didn’t dwell on it too long.

The rest of the film is a treat to watch, but I want to talk about the ending, because it began so strongly. Ares, it’s revealed, isn’t a powerful German general or a soldier, but instead a humble looking politician. I loved this twist because it makes so much sense for the God of War to become a politician. After all, it’s not the generals that start wars, it’s the politicians. So what better disguise for Ares?

I also loved that he seemed to be far less aggressive than you’d expect the god of war to act, and as he tries to convince Diana to join him, it’s hard to deny his arguments.

“I gave them weapons, but I never made them use them. They did that all on their own.” – Ares to Wonder Woman

Ares calls himself the god of truth, and I would have loved for that to have actually been the case, rather than mere misdirection. It would obviously wouldn’t be true to Greek mythology, but neither is the rest of the film, so why not turn expectations on their head. His actions more befit a god of truth as well, since he never directly started wars, but instead simply gave mankind the tools to destroy themselves.

Diana’s confrontation with Ares had the makings of becoming a truly memorable ending, one that could have set Wonder Woman apart. After training so hard and wielding weapons forged by the gods themselves, Wonder Woman would face her greatest foe. Only it wouldn’t be her strength that was tested, but her spirit. After witnessing the horrors that mankind inflicts upon itself… would she decide that they’re worth protecting?

I thought that was the direction the ending was headed… and then it just decided to throw that all to the wind in exchange for yet another CGI-laden battle. It’s not a bad ending by any means, but given the nuance I saw through the rest of the film’s writing, I can’t help but wonder if this wasn’t forced on the creative team by corporate. It’s a fun battle to watch, though Ares CGI armor didn’t look quite… “finished?” I guess is the term I’d use. However, I think the quieter confrontation of Wonder Woman’s guiding principals would have made a far more poignant ending.

Imagine that, instead of listening to Steve’s last words while partially concussed, she was hearing him while still angry and unsure of how to treat humanity. And then, only through his noble sacrifice to save thousands of people he doesn’t know, would she remember that humanity is capable of more than just cruelty, but tremendous acts of compassion and bravery.

As it stands, Steve’s death is still an excellent scene and a definite highlight of the entire film. His smiling, crying, laughing expression at the end tells us so much about his character. Here he is, facing the last few moments of his life, and he feels so lucky for being able to be here to save the world. So sad that he won’t get to spend the long life with Wonder Woman that he’d envisioned. Yet also overjoyed that he experienced such a deep and wondrous love for a woman who was nothing like he imagined.

All in all, despite a few reservations I have about the ending, Wonder Woman is the film we’ve all been waiting for DC comics to release. She’s a hero in every sense of the word, one who inspires hope and courage. She’s not a bitter, cynical antihero like they’ve turned Superman into thankfully.

They also didn’t leaden this film with winks and nods to future characters either. I was sure, given DC’s record with its films, that we’d meet Bruce Wayne’s Great-Great Grandfather in the trenches or some nonsense. Luckily I was wrong and instead they focused on telling us just a single story.

The story of Wonder Woman.

And it’s a story worth the telling.