It’s that time again folks, time for my one sentimental post of the year. I’m going to lay it all down on the table, and you better damn well enjoy it, no matter how depressing it gets!

So I was watching Oprah’s Life Class last night. Yeah, that’s right, I was watching Oprah. There, I said it and don’t you dare judge me. Anyway, on her Life Class, she touched briefly on how we are all constantly learning, even from horrible situations. It was at this point that I wanted to counter her with my years living with clinical depression, I mean what the hell could that possibly have taught me? And yet as I reflect back on those years, I find that I did indeed learn a lot from living with depression. In fact I wouldn’t be the strikingly handsome, and cuttingly witty man you see before you without those years teetering on the edge of oblivion.

I was diagnosed with depression when I was still in elementary school, sometime around age seven or eight I think, and I lived with it until it finally went into remission at the age of nineteen. Like most things I think you need to live it in order to truly understand it, but depression isn’t something I would wish on anyone, so I’ll do my best to describe it.

What is it that you care about? What’s your greatest passion? Now imagine that one day you wake up, and that you no longer cared, or worse yet, felt physically sick at the very idea of pursuing what you once loved.

Imagine waking up every morning wishing you hadn’t. Imagine going to sleep every night wishing you wouldn’t wake up the next morning. Imagine feeling physical pain when you did something as mundane as go to school, or work. Imagine having a voice in your head telling you your a worthless human being not worthy of the air your breathing, repeating in an endless loop, and drowning out your other thoughts.

What I’m trying to say is that suffering from depression is like being in a nightmare you can’t wake up from. For nearly twelve years this was my life, from the age of seven until around nineteen when it finally went into remission. I’ll be talking about my recovery, and my upcoming book, next week. Right now I’m going to share with you the three things that depression taught me.

In the darkest days of my life, I didn’t see myself having much of a future. My fellow classmates would talk about college, and careers, things that I couldn’t possibly imagine for myself. Hell sometimes they’d talk about parties they were going to go to that weekend, and I couldn’t see that far ahead either. Luckily for me, there was one thing that I could see. Every night I would sit down at my computer and boot up Mechwarrior 4: Mercenaries, a computer game about gigantic walking death machines blasting each other with lasers.

Every night I would join a group of people online and play Mechwarrior like it was the only thing that mattered, because at the time it was. My online persona was a Galaxy Commander, and it was just as badass as it sounds, I was in command of thousands of mechwarriors cutting a bloody swathe across the galaxy. Okay it was actually only a dozen or so people, and my rank was purely symbolic rather than functional, but for a couple hours a night I was no longer a sad depressed teenager who couldn’t even get through a day of school without breaking down in tears. Mechwarrior became a refuge for me, a place to escape, and where I could interact with other people and not feel threatened or inadequate.

I still use the same techniques today. I don’t worry about how am I going to write an entire book, I work on one chapter at a time, and sometimes if that’s too daunting, one paragraph at a time. I tackle this blog one subject at a time, I don’t worry about what I’m going to be writing about a year from now, I go week to week, day by day. I let myself enjoy the small triumphs in life. Speaking of which:

2. Enjoying the Small Things in Life

When your severely depressed, you don’t have many big triumphs, or if you do you don’t realize them at the time. The big things that most people enjoy (parties, dates, success at work/school) just don’t come easily to someone who’s constantly having to fight his own mind in order to simply exist. For me, it was the small things that I was able to find happiness in. Going out to dinner, seeing a good movie, or even just making it through the day without crying was a triumph for me. The little things are what kept me going.

And looking back I had my share of big triumphs, I simply didn’t realize it at the time. I once got a misogynistic and borderline abusive teacher fired (well he “resigned” but I can read between the lines), because I spoke up when one else would. I was told by a member of the school board that they’d been looking for a way to get rid of him for years, but it wasn’t until a student finally spoke up that they could do anything. I also once went to a week long program at WSU, visiting their Veterinary Medicine program as part of Cougar Quest. So if you’re depressed and reading this, don’t feel like you’ve not accomplished anything because I’m sure you have. The only problem is that you can’t see it yet.  But the point is, don’t worry about seeing it yet, that will come in time. For the moment just live…well in the moment.

Even now that I can see my bigger triumphs, I still take pleasure in the small ones. I applaud myself for going to the gym, I allow myself to feel joy for doing something as simple as writing this blog entry, or enjoy a sunny day (which is a rare thing here in Washington). 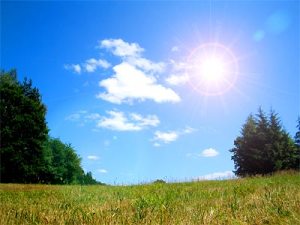 A Sunny Day: Nature's way of saying "Hey, it could be worse. The sun could explode!"

3. I Learned to Write

Oh of course schools had taught me to write the English language of course, but there’s a huge difference between writing a class assignment and writing for yourself. And that’s who I write for, me. I’m thrilled that I have an audience that seems to enjoy what I write, but even if you all left, I would still write. Probably less often, but I would still write.  And that’s the most important lesson depression taught me, that I’m meant to be a writer.

Even before Mechwarrior, writing was there. Before I came to enjoy the simple things, pen and paper brought me peace. Dozens, maybe even hundreds, of half written stories, brainstormed novels, and fan fiction stories lay scattered in my wake. During classes, when I was too stressed out to listen to the teacher, I would write a story. When life got too unbearable I would sink myself into a fictional world I’d created. Once, even a suicide note turned into a story, saving myself from actually following through on the note.

Oprah said on her Life Class show that you should pursue what you believe you can contribute to the world, not what the society tells you to contribute. I used to make myself miserable during high school, thinking I should be a star athlete or Valedictorian, because that’s what society was telling me to do. Would I still have become a writer had I not been suffering from depression? Or would I instead have pursued being a football or basketball star? Would I have spent hours on hours on hopeless manuscripts and stories, and by extension would I have learned the lessons about writing those disasters had to teach me? Probably not.

That’s why, even if I could, I wouldn’t change a thing about my life. I once looked on my years of depression as a waste, but now I can see those years for what they were, a valuable part of my life. I learned things during those miserable years that might have otherwise taken decades to figure out.

Don’t get me wrong, depression is a terrible thing, and if you’re suffering from it get treatment immediately. What I’m trying to say with this post, is not that depression is a wonderful teaching tool, but that you can learn from even the most terrible of situations. If you’re in a place right now where you feel nothing is going right, that you’re up against the wall, just take a deep breath and look around. Figure out what that moment is trying to teach you.

And then push your way out of that corner, using the very lesson you learned from it.