Wow, what an intense couple of weeks this has been. Having a blog go from a few dozen readers composed of only friends and relatives to suddenly logging 18,000 views in a single day and averaging 4,000 views since then has been a lot to absorb. I’m really glad all of the people that have viewed my blog and written in have enjoyed it so much. That said, I am getting a bit burned out on Mass Effect so this will be my last post on the subject for a while. I may come back to it when they release the Extended Cut and analyze whether it works or not, but until then you will all have to join me as I review other stories from TV, Games and Movies. But moving right along, the final piece of my Mass Effect 3 coverage:

So here you have it folks. Bioware says the completely insane ending is completely acceptable, and instead of changing it, will only be “clarifying” it.

Basically they are going to make sure the ending is clearly labelled as crap, rather than leaving us to come that conclusion ourselves. As hopeful as it is to see Bioware taking our complaints into consideration it’s just…not enough.

They could add an hour long ending cinematic to the end, and it still wouldn’t redeem the ending. Unless that cinematic wakes up Shepard from his indoctrination coma or something. In the end we’re still stuck with the God AI Starchild and his very questionable logic, the destruction of all Mass Relays, and the ridiculous pick one of the colored buttons “choice” at the end.

The point is that, unless this Extended Cut from Bioware incorporates the Indoctrination Theory into the game, or even better, completely rewrites the last ten minutes of the game, nothing the Extended Cut can do will make the ending acceptable. It would be like adding a new coat of paint to a car that crashed into a brick wall at 120mph. No matter how much you dress it up, at the end of the day it’s still just a pile of smoking wreckage.

Are there going to be more/different endings or ending DLCs in the future?

No. BioWare strongly believes in the team’s artistic vision for the end of this arc of the Mass Effect franchise. The extended cut DLC will expand on the existing endings, but no further ending DLC is planned.

I’d really love for someone from the actual writing staff at Bioware to come forward and tell us what their artistic vision was. Bioware’s PR Department keeps harping on about how proud they are of their writers and insisting the ending we got was totally planned, and not at all the rush job that it totally looks like. So if that’s true, how about Bioware let their writers off the leash and tell us about the ending. As a writer myself, I’ve written some really trashy endings too. Sometimes as a writer I get too close to the story, and while the ending works in my own mind, when someone else reads it they’re dumbfounded by the stupidity. I then try and walk them through that horrific ending, showing them how it makes sense to me, but in doing so realize how convoluted it is to someone who hasn’t lived and worked with the story for a year. And that’s what has really stuck out in this whole thing, none of the writers have tried to take us step by step through their ending to show us how it made sense to them. If this was truly their artistic vision, they would be able to do that, it probably still wouldn’t make sense but we could see how it could make sense from their perspective as the creators.

Instead we’ve had BioWare PR Reps spewing forth endless drivel of “look at all the great reviews we got!” “We sold X amount of Copies” as if these things excused the ending. Oh, and of course everyone’s personal favorite: “Artistic Integrity”, but of course if artistic integrity were a thing that still existed at BioWare:

1) This never would have been released

2) They wouldn’t be hiding behind the shield of “artistic integrity” to avoid taking responsibility for the fact that the ending is broken on several fundamental levels, as in a creative writing 101 level.

Time to Move On 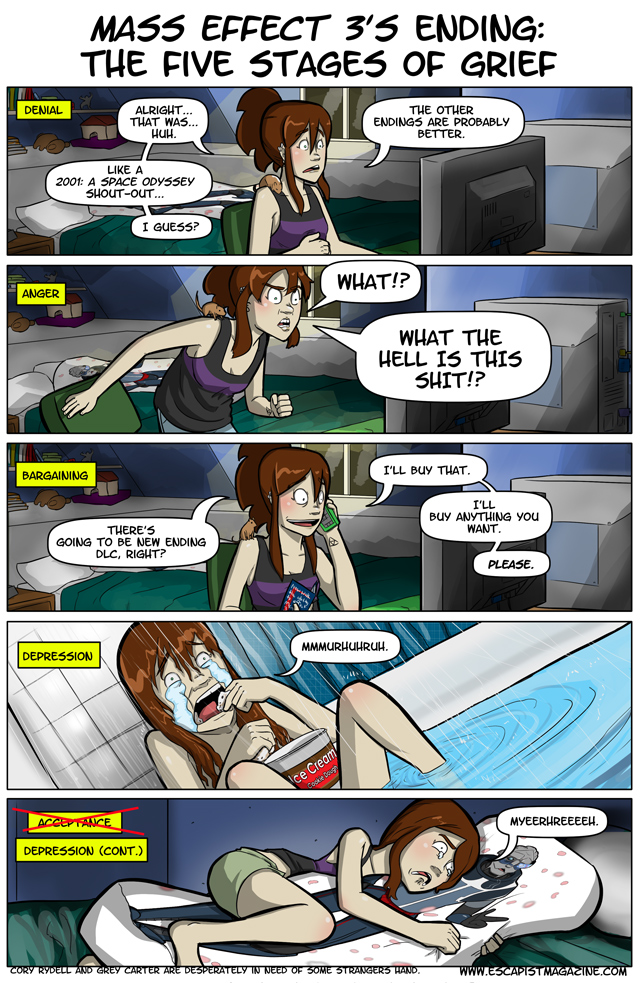 So with this latest announcement from Bioware, I no longer have the desire to highlight the issues with Mass Effect 3’s ending. Instead, since what we’ve been presented in Mass Effect 3 is the ending we are all now stuck with, I feel we should all start moving on to better games and, more importantly, better companies. There was a time BioWare was on my “buy no matter what the hell the game was about” list because they just made incredible story driven games. Now, whatever Bioware comes up with next, I might pick it up when it hits the 10$ bargain bin…but only if its getting rave reviews from people I know, and not just game review sites.

However, I still love Mass Effect 3 despite the kick in the balls that is the final ten minutes. There are some great moments in this game, and they deserve to be enjoyed. So instead of dwelling on those last ten minutes, I’m going to highlight my favorite moments from the game. 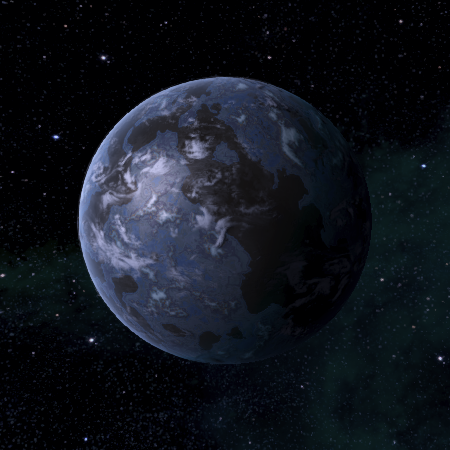 I have a save game that is a straight run from ME1 to ME3, a Shepard where I played through the game totally blind and not knowing what to expect. So while I do have other saves where I managed to save Wrex on Virmire and left no man behind on the Suicide mission, my first playthrough was always blind. My Shepard Prime as I call him, made mistakes throughout all three games, and I must say Bioware did a great job incorporating these mistakes.

Rannoch is where this really hit home for me. While I had completed Tali’s loyalty mission in ME2, I later lost her loyalty when I sided with Legion in an argument which then negated Tali’s loyalty. Forgetting that point in the Suicide Mission I ordered her to open the doors in the first section of the base, and she succeeded in her mission at the cost of her own life. That was a really poignant death in ME2 for me, because it was fast and brutal. A lot of deaths in movies and games are really drawn out, with the characters sharing tearful goodbyes, which works great in certain situations. But in ME2, Tali takes a bullet to the head and slumps to the ground. No goodbyes, no last soliloquy, just dead. The characters don’t even have a chance to mourn as they are forced to keep fighting. That’s when I realized “holy crap, this IS a suicide mission”.

So now years later, trying to infiltrate the Geth Dreadnought, we catch a brief glimpse of Rannoch in the distance:

“Tali would have loved this.”

That was a powerful line perfectly delivered by both of Shepard’s voice actors. Just a small reminder than the choices you’ve made throughout the game have mattered. Tali isn’t here to see Rannoch because you made a mistake. 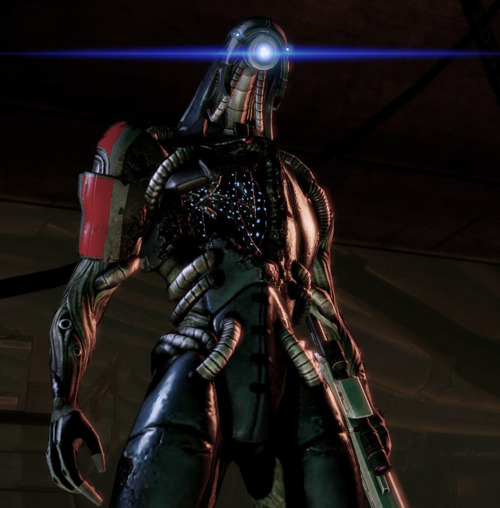 This was quickly countered by a happy reunion with my favorite character, Legion, and I was grinning from ear to ear when I heard him say “Shepard Commander!” again. Then, once again, we’re met with an incredibly powerful scene where Legion must sacrifice himself so that his people can become truly unique.

Yes, in the last moments of his life Legion experienced individuality, he was no longer an amalgamation of thousands of different programs working in tandem but a fully realized person. Even if he wasn’t made of flesh and blood, he was every bit as alive as Shepard. And in that moment he makes the ultimate sacrifice thus proving that – 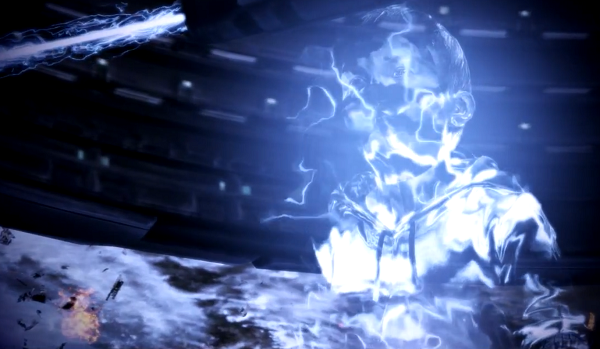 “Synthetics will always seek to wipe out Organics”

SHUT UP! WHO SAID YOU COULD SPEAK!?

As one of my readers, Captiosus, recently pointed out, Thessia is where the game begins to unravel. He’s right, that is where the game begins to start steamrolling toward the ending, exchanging the intricate plot threads of other missions like Tuchanka and Rannoch for a straight up shooting section. That said however, Thessia was one of my favorite parts of the game. 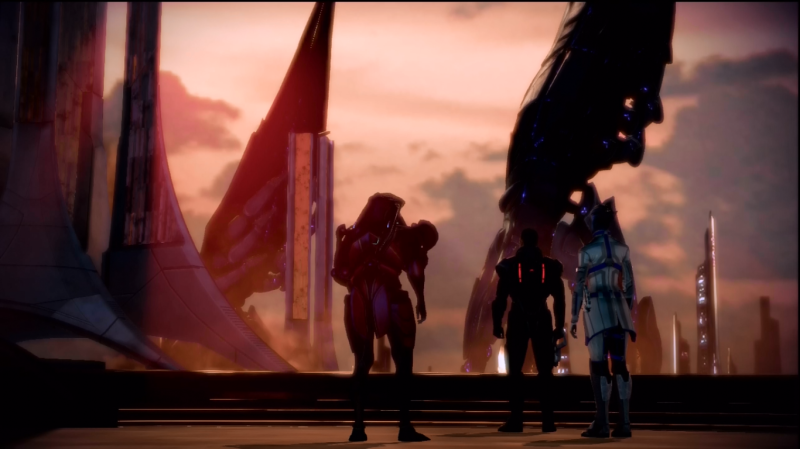 Whereas the fifteen minute intro section of Earth being destroyed didn’t really affect me, the fight through the streets of Thessia really moved me on an emotional level. Seeing the desperate, frightened Asari soldiers selling their lives in a hopeless battle, the utter devastation being wrought by the dozens of Reapers scouring the cities, all punctuated by some brilliant dialogue from Liara as she watches her homeworld turned to ashes and powerless to stop it. Then, after Cerberus intercepts you at the Beacon, and you hear the terrified screams of an Asari soldier as a Reaper lands right on top of her position, I felt just as angry as Shepard. I was ready to go ripping up the god damn galaxy for vengeance, and when I snapped at Joker for making a joke about the massacre, it was like Shepard was saying exactly what I was thinking.

That was really one of the highlights of the game for me, even though it does represent the turning point and downward spiral of the end-game, it still has some great writing and memorable moments.

How epic was this sequence? Holding off wave after wave of Cannibals, Banshees and Marauders as EDI makes the necessary calculations to launch the missiles. Finally a Reaper itself starts trying to incinerate you while your still fighting off what seems like the entire Reaper army. I have vivid memories of retreating into a building, desperately shotgunning three cannibals before being forced to take down a forth and fifth with biotics and melee attacks. The rest of my squad was down, I was out of medigel and I had only a handful of ammo left. Then EDI tells me that the last set of missiles are on target and I make a mad dash for the control pad, ducking through waves of Reaper troops and managing to launch the missiles just before my health is gone.

The Run for the Citadel Beam

Now, there are plenty of continuity issues with this run to the beam, such as what the hell happens with your squadmates, why aren’t the tanks able to help us out here, and why does Harbinger have a rapid fire beam clearly superior to his other Reaper brethren?

All that aside, however, I loved that charge for the beam. It was a desperate move by desperate men, and they just nailed  that whole sequence. That final suicidal charge across the field, watching as the entire task force gets incinerated around you and the Citadel beam gets ever closer… and then BAM, you’re incinerated by Harbinger’s beam. Game over, the credits roll.

Shut up! That’s where the game ended and no one is going to tell me otherwise!

Anyway, everyone join me this Thursday for my next blog post…about something that isn’t ME3 this time.