I already talked about how Dukat was one of the most interesting characters on the show, but there was another that was even better and who demands a blog post of their very own. 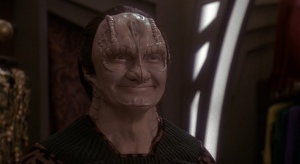 It seems Cardassians make the most interesting characters, because it was Garak and Dukat that made DS9 an exceptional show. Like Dukat, Garaks past life was filled with darkness. A member of the Obsidian Order (the Cardassian KGB) he tortured and assassinated anyone considered an enemy of the Cardassian state. Garak hints that he may have been responsible for even greater crimes, but after his exile from Cardassia, it becomes clear that perhaps his greatest crime was that he lacked the cruelty necessary to be a true member of the Obsidian Order. While Garak does possess a ruthlessness that allows him to kill anyone that might stand in his way, his deep friendship with Dr. Bashir (a humanitarian in every sense of the word) suggests that Garak does have a conscience, as much as he would loathe to believe it. Much of Garak’s past is a mystery since it’s never fully revealed in the show (which is part of why he’s so interesting: people love mystery), but his actions throughout the show suggest he’s not proud of what he’s done.

That said, however, he’s still a ruthless individual and compulsive liar. And that makes him the most awesome character in a series filled with awesome characters. The fact that Garak is constantly lying makes us, the audience, constantly question both his motives and his words everytime he speaks. He’s a character that forces us to think which is always a good thing, and he’s so cheerful while he lies that he never becomes unbearable.

The beauty of this scene is that reveals a lot more of Garak’s character than it initially implies. They’re all true because hidden in those lies is always a kernel of truth, the foundation around which the lie was built. During that Episode, The Wire, Garak tells a number of stories to Dr. Bashir, all of them different, but they all have certain similarities. He’s always on Bajor, someone always ends up dead, and there always betrayal between himself and Elim. Elim is later revealed by to Garak’s first name, implying that Garak’s betrayal wasn’t of another person, but of another part of his personality. Piecing together the disparate parts of Garak’s stories, you can see a glimpse of the truth: at some point in the past he was forced to betray his belief in obedience to the state in order to remain true to himself. He was probably asked to do something so despicable that even he, after all the horrors he’d committed, couldn’t bring himself to follow orders.

That’s the beauty of an unreliable narrator, it’s up to the reader/watcher to figure out what was real and what wasn’t. Sure a fully realized and truthful backstory can be just as fulfilling, but there is an equal amount of enjoyment to be had from piecing together the character ourselves. It appeals to the Sherlock Holmes in all of us, applying reason to figure out a puzzle. Garak’s mysterious past also serves an important function to the plot and story as a whole.

During the Dominion War, the Federation and Klingon Empire are desperately holding the line but taking heavy casualties. They’re also so busy defending that they can’t launch any offensive operations, meaning that the war is turning into a war of attrition that the Federation can’t possibly hope to win when the Dominion can simply clone more soldiers. The only way to turn the war around is the bring the Romulan Empire into the fighting, opening a third front and forcing the Dominion to spread out its line of defense. Unfortunately the Romulan Empire is content to sit back and watch its two greatest enemies get ground into dust. The only way to bring them in is to convince them that they’re in imminent danger as well. Well that’s going to require a massive deception. It’s going to require guile, finesse and a deviousness bordering on madness.

This was featured in the episode, In The Pale Moonlight, and is one of the best episodes in the series. A bunch of Starfleet officers, who have had the principles of honesty and integrity pounded into them through their entire lives, have absolutely no idea of how to craft such an elaborate deception. Fortunately, Captain Sisko has Garak to assist him. What makes this episode truly great is that the entire time Sisko is crafting his plan, Garak is pretending to be the lowly middle man, simply helping Sisko to create the deception. In truth though, Garak is allowing Sisko to run his little quaint operation as a cover for his own idea.

Sisko believed the plan was to use a fake recording of the Dominion planning the invasion of Romulus. The true goal of the plan however, is to kill the Senator who is arriving to evaluate the evidence. Why? Well I’ll allow Garak to explain:

“That’s why you came to me, isn’t it Captain? Because you knew I could do those things you weren’t capable of doing…”

100% pure awesome. This is truly Garak’s shining moment in the series, for both the actor and the character, because that monologue is absolutely awesome. The plan, which at first seemed needlessly complicated, is reduced to it’s most basic component. Instead of relying on a fake recording, that would be inspected a thousand times over, and having four or five people wandering around knowing the truth, we instead rely on the Romulan’s own paranoia to accomplish our goals. Instead of telling the Romulans they’re in danger, we let them come to that conclusion themselves. Remember in Inception, the whole point of the movie was make the dreamer believe the idea that was planted in the dreamers head was the dreamer’s idea. That’s what Garak does here, and he didn’t need to invade a single dream to do it.

Garak’s lying continued to play an important part in the plot of Deep Space 9, lending the Federation his expertise in lying and deception on several occasions. Without Garak, there wouldn’t have been a believable way to pull off In the Pale Moonlight because we’ve spent so much time with the honest and honorable Federation that we’d never believe that they could have pulled off such a brilliant scheme on their own. Garak uses his ruthless nature and expert deceptions for good…most of the time.

One of the other things that made Garak so interesting, was that you could never predict how he would react to a situation…or who’s side he would be on. In the episode The Die is Cast, Garak accompanies his old mentor Enabran Tain on a secret mission to destroy the Founder homeworld. The Founders, a species of shapeshifters, control the Dominion and are essentially the Achilles Heel of the entire empire. They control their soldiers through a combination of religious belief and powerful drugs. Without the Founders to organize and lead, the entire Dominion would collapse. Still, even with this knowledge, the Federation would never commit genocide. To hell with that though, Garak knows what has to be done.

Unfortunately the whole thing turns out to be a trap and the fleet is wiped out, with Garak and Odo barely escaping with their lives on board the Defiant. Later that year Odo is stricken by a strange disease and needs help from the Founders, and Garak comes along to question the founders about possible Cardassian survivors. Here is the absolutely chilling response:

If this were any other member of DS9, they would just choke down their pride and chalk this up to anger. They would rationally dismiss the Founder’s threat as mere anger or saber-rattling. You know how Garak responds?

He tries to commit genocide. Again.

Oh yeah, that’s right. Garak tries to hijack the Defiant’s weapon systems and bombard the Founder homeworld into the next dimension. What makes this moment truly great is how consistent that action is with his character, even though what he’s trying to do is a horrific war crime. There’s always the temptation to make a character conform with societal norms, because you want people to like your character (unless its a villain), and Garak trying to commit genocide is a pretty dark moment in the series. You can hear and see the desperation as he pleads with Worf to let him reduce the Founders to smoking cinders. But the writers didn’t shy away from letting Garak show us the ruthless anger in his heart, and was one of the defining moments of his character. Garak, a usually quiet and restrained individual, is driven into an uncontrollable fit of rage by the Founder’s words. It was a very human response, because after that speech, even I was rooting for Garak to bomb the planet.

Garak is another excellent example of a strong character: he’s complex, he has faults, and he’s relatable (even though he’s an alien).  Garak, along with Odo, Quark and Dukat are what made DS9 such an outstanding show in it’s own right. Sure I didn’t like the Prophets myself, no matter how well they fit in thematically, but all that aside, I can’t help but admire DS9 for taking Star Trek to new places because that’s what Star Trek is about.

Boldly going where no one has gone before. There’s a lot of darkness between stars, and DS9 wasn’t afraid to explore that darkness to its fullest extent.