I met with a friend for coffee today and he had an idea for a really cool experiment: sit down with a pen and paper, and write a story using my left hand. The idea being that forcing myself to use my off hand will cause the neglected side of my brain to write a story, which might result in something different than what I usually write. For 30 days I’m going to write 200 words using my left hand and see what happens.

Well because I have some stories written that I’ve shared with only a select few. I’ve only ever tried to publish one story, which was quite correctly rejected, and if I’m ever going to make it as a writer I need to get over the fear of people seeing errors in my work.  So I’m also writing this totally uncensored. Normally when I write I sort of edit while I go, changing words and reorganizing paragraphs. This is going to be one long continuous writing exercise, crossing out words only when they’re so illegibly written that even I can’t identify them.

It’s obviously not a full story yet, and I have no idea where it’s going but looks like its gonna be a romantic story so far. Which is already unusual because I don’t normally write romance, since there’s that whole “write what you know” rule about writing and I know about as much about romance as I do theoretical physics.

This is also a small and easy project, 200 words a day will be a piece of cake. It will also be an interesting experiment into our weird two-brained minds.

Most importantly though it’ll get me over my constant fear of being outed as a terrible writer. By putting this story out there without any editing (aside from fixing spelling mistakes), I’m showing the worst and most raw story that I can possibly create. It’s like getting over a fear of public speaking by giving your first speech naked, once you’ve experienced the absolute worst case scenario, everything else is a breeze.

Is this a terrible idea? 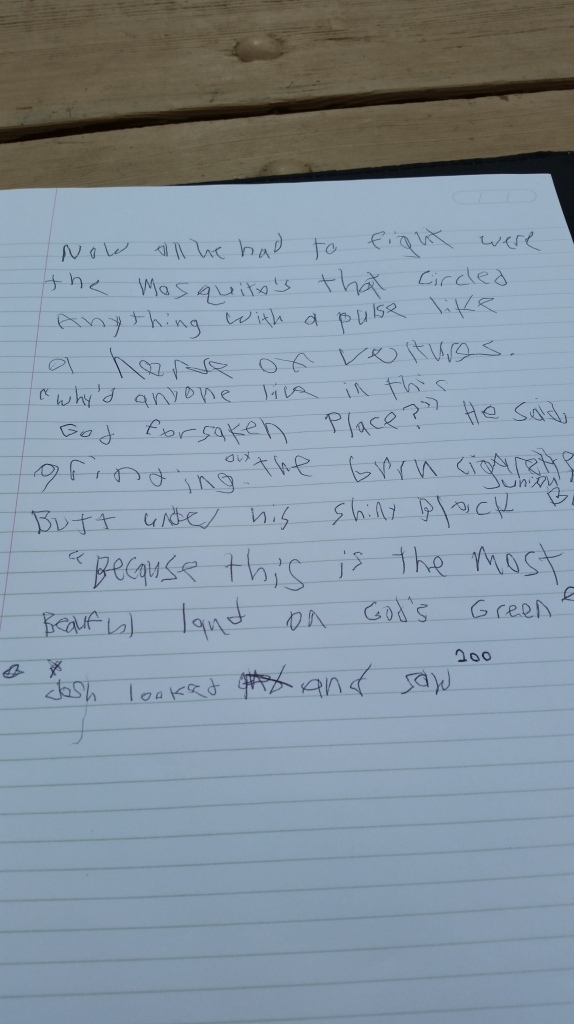 As you can see I’m pioneering a whole new form of language that combines English print, cursive, hieroglyphics and Sanskrit into an indecipherable mess. For those of you unable to read my genius, here it is in standard readable English.

It began, as it always does, in a small town in Alabama. The Confederates had just lost their civil war and now the town of Huntsville was trying to pick up the pieces.

Josh McKinney sucked the sweet tobacco flavored smoke into his lungs as he leaned against the blackened wall of the Blacksmith’s house. He gently nudged an old rusted horse shoe. It was warped and twisted, and as he pushed it though the grey ash that covered the ground, he wondered if the fire from his cannon had melted it or if the Rebs were too stupid to shape a horse shoe.

McKinney and his battery had gotten a reprimand from their CO for using the old Blacksmith’s shop for target practice, but it had been worth it. He had just graduated artillery school when the Rebs had up and surrendered.

Now all head to fight were the mosquitoes that circled around anything with a pulse like a horde of vultures.

“Why’d anyone live in this God forsaken place?” He said, grinding out the burning cigarette butt  under his shiny black union-army- issued boots.

“Because this is the most beautiful land on God’s Green Earth.”

This was fascinating to read again as I was transcribing it here. First of all the people who have read my writing tell me I’m very good at describing things, and yet here I don’t describe anything aside from the horse shoe.

I also used the passive voice a lot, which isn’t really a good thing, but interesting none the less since I try to limit that in my stories. Most interesting though is Josh McKinney, who is definitely not the type of protagonist I usually use. He blew up a blacksmith’s house (or shop, because apparently I can’t keep details straight when I’m using my left hand) just so he could fire a cannon. He’s a dick.

So the one question I have is this:

Is this actually something that’s happening because I’m using a different part of my brain? Or is it placebo effect from thinking that’s how this should work?

I have no idea, but hopefully by the end of this 30 day project I will have an answer. And hopefully a story to show for it. You can expect daily updates on this, in addition to my normal articles.

Speaking of which, tomorrow I’ll premier the first of a series of new articles called “Is It Really That Bad?” and it’s going to be on Fifty Shades of Grey. So, don’t miss that, because you know it’s going to be bad.