Pixar has once again shown the world why it’s the single greatest storytelling company in the world. After watching Brave I was afraid that Disney’s corrupting influence might have undermined Pixar’s ability to tell amazing stories. As I wrote in my review of Brave, while it was still a great movie that made me cry, the story lacked the cohesion I’ve come to expect from Pixar. I speculated that perhaps the corporate bigwigs at Disney were exerting too much control over Pixar in an attempt to sell  merchandise. I’m glad to say that, though I’m sure Disney is still as evil as ever, the crew at Pixar are still amazing storytellers.

This has all the hallmarks of an amazing Pixar movie; great characters, a captivating story, and laughs and tears in equal measure. Yet it was also more than that, because Inside Out is truly special; it’s one of the best and most accessible explanations of the human psyche I’ve ever seen. I think they should show this movie in elementary schools every year, because I can’t tell you how helpful it would have been to see this movie when I was that age.

If you want to understand how the human mind works forget reading the works of Freud, Jung, Skinner, or Pavlov. Just watch Inside Out. It shows just how amazingly complex the human mind is, and does it in a way that makes us all just a little more aware of the struggle all of our fellow humans are going through. And it did all of that while still creating an amazing story.

A story about being human.

Inside Out made me cry, and not just a single manly tear either. So be warned,  if you go to this new Pixar movie…

The story follows an eleven year old girl named Riley who is forced to move from her home in Minnesota to the hellish dystopian nightmare of California. Thankfully its only San Francisco and not Los Angeles or this would have been a far darker movie…

San Francisco isn’t the setting though, and Riley isn’t the main character. Instead Joy, Sadness, and the other emotions that govern human behavior are our cast. And the setting is the inside of Riley’s mind, featuring islands of personality and glowing orbs that represent memories each colored by the emotion that defined them. Thanks to main character Joy, most of these memories glow a brilliant gold like tiny little stars.

Joy is voiced by Amy Poehler and I just want to point out what an amazing casting choice this was because holy shit, if anyone could personify joy it’s Amy Poehler.

The other character is Sadness who immediately starts screwing up Joy’s plans to keep Riley happy.  At first she seems utterly useless, even destructive, as she begins tainting Riley’s memories and turning them from brilliant gold into somber blue as they joy is washed out of the memory. Watching Sadness was like watching my younger self, a sad bumbling oaf that can’t do anything right. Which kind of ticked me off.

Great, I thought, another movie about how we need to ignore our negative feelings. Don’t get me wrong, I think we should all endeavor to be happy when we can but there’s just something… wrong about our society’s current trend of doing nothing but trying to ignore sadness and pain. If you have Facebook (and if you don’t, welcome to the internet new person, I’m touched I was the first web page you chose to visit) then you probably have someone or several someones posting nothing but a constant stream of image macros about being happy. You know what, sometimes sadness is the appropriate response to a situation.

And fortunately Pixar understands that.

Joy ends up becoming a microcosm of that sickly, fake positivity that drives me crazy. When Riley is forced to move, Joy is determined to keep everyone happy at any cost. Joy spends the first act of the movie trying to contain and diminish Sadness.  Sadness, however, is compelled to try and touch all of Riley’s memories which irritates Joy to no end. Joy, like a lot of people out there, never really questions why sadness exists. Joy sees her as a threat to Riley’s happiness, especially after Riley’s mother makes the worst request a parent can make of a child.

“We need our happy girl.” Riley’s mother said, and Joy is just all too happy to try and fulfill that request. Even at the expense of Riley.

After an embarrassing incident at school, Riley starts shutting down emotionally. The islands of personality, once bright and humming with life, turn dark and crumble away. To Joy’s horror a new Core Memory, a memory that helps define Riley’s identity, appears. Unlike the other five core memories though, this one is blue. A sad memory, and Joy goes insane trying to keep it from becoming integrated with Riley’s personality.

And ends up breaking the whole thing, getting sucked away from Headquarters (I’m embarrassed to admit I didn’t actually get this pun until I wrote it out)  and into the sprawling vastness of the human mind.

Now it’s just Anger, Disgust and Fear running Riley’s brain. This is the best allegory for the depressed brain I’ve ever seen, because that’s exactly what it feels like to be depressed. Those who haven’t been depressed assume that it must be like Sadness taking over and Joy being missing, but its not. It’s both Joy and Sadness gone, and you’re left feeling numb. Anger, Disgust and Fear are all you have left and they only draw out a reaction in extreme situations. As you can probably guess, this doesn’t turn out well for Riley.

And while the others are screwing up, Joy and Sadness try to return to Headquarters with Riley’s core memories. It’s while wandering the halls of Long Term Memory that Joy and Sadness run into Bing Bong, Riley’s old imaginary friend.

Bing Bong has been nearly forgotten and now he wanders around the halls of Long Term Memory collecting memories of when Riley and he used to play together. That alone almost made me cry, especially when he begins recalling their magic flying rocket that was powered by music, they’re dream was to fly to the moon. But now all he can do is remember, and hope that one day he’ll be remembered too.

Joy’s first instinct is to try and cheer Bing Bong up, promising him that she’ll make Riley remember him when they get back to Headquarters. However she’s not the one that makes him feel better, it’s Sadness. Giving the audience the first glimpse at Sadness’s importance to the story, she doesn’t tell Bing Bong to be happy. She listens.

Because Sadness is Empathy: our ability to relate to another person’s suffering.

Sadness gets Bing Bong back on his feet and he leads them into the depths of Riley’s mind where they can catch the Train of Thought back to the Headquarters.

Unfortunately before they can arrive, our trio of bumbling emotions have managed to make the worst decision they can: They’ve decided to make Riley run away. The plan is to return to Minnesota to create new Core Memories for Riley, which is a charmingly 11-year-old idea. Pixar’s ability to realistically step into the shoes of their younger selves never ceases to amaze me. The emotional turmoil of this decision derails the Train of Thought and sends Joy and Bing Bong plummeting into the Memory Dump where old memories disintegrate into nothing (like the memory of where you put your car keys).

It’s here that Joy finally makes an important discovery while examining one of Riley’s Core Memories, a memory that both Joy and Sadness remember fondly: Riley’s championship hockey game. Joy remembers it as a joyous occasion when all of Riley’s friends came to celebrate with her and Sadness remembered it as the time Riley missed the final shot that could have won the game.

As Joy rewinds the memory she realizes that the only reason she remembered that hockey game as a time of joy, is because Sadness brought others to help Riley. Her friends came because she was sad, they came to help.

Sadness is a critical part of Riley’s personality, as it is in all of us. Sadness is what allows us to appreciate Joy, because without the contrast between the two than neither one would mean anything. It’s why Riley became depressed when they were lost, because Anger nor Disgust nor Fear can define our lives like Joy and Sadness can together.

With new found understanding of Sadness’s importance, Joy tries escaping the Memory Dump with Bing Bong using his old magic rocket powered by singing. This is the part where I cried so many tears, because they just can’t escape…

Until Bing Bong stays behind.

I was crying not only because of how emotional this scene was, but because I couldn’t remember any of my imaginary friends either. I started actively trying to think of them, I must have had some, but I couldn’t remember a single one.  I was crying because it was a great thought to think that this is how they were forgotten, because that was what was needed to help me grow as a person. 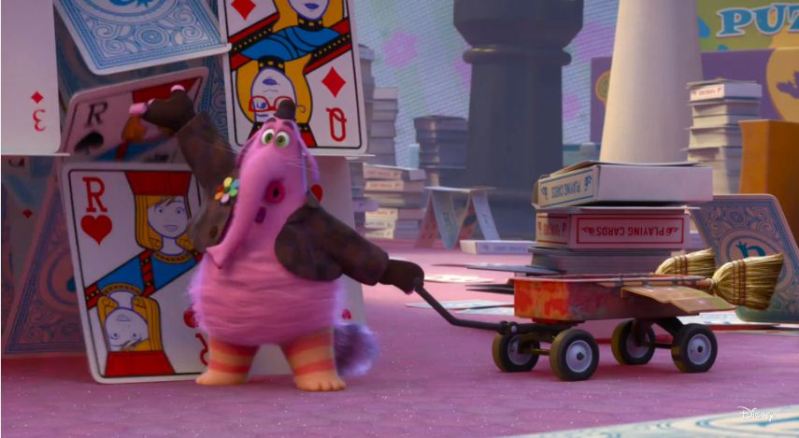 “Take her to the Moon for me.”

After a tearful goodbye to Bing Bong, Joy rescues Sadness and returns to Headquarters. Joy tells Sadness to take over, and it’s the sadness that makes Riley realize what a bad idea running away is. It’s also Sadness that guides Riley to confessing to her parents just how unhappy she’s been. My eyes were sore from the tears at this point, but that didn’t prevent me from understanding the great message Pixar was sending me.

It’s okay to be sad.

Sadness is an important part of our personalities, not just because it contrasts with Joy, but because sadness is how we let people know we need help. It’s not just some useless hanger-on that drags everyone down at a party, it’s a critical survival mechanism. It’s our distress signal to the world.

And more often than not, the world comes to help us.

The other great thing about this ending is that Riley’s parents don’t tell her that she should be happy. They don’t offer useless platitudes on how her life is great compared to some poor child in Africa or some similar bullshit. Instead they do what everyone should do when trying to cheer someone up, they listen.

Because in the end expressing sadness is expressing our desire to be understood.

Watch this movie people, just make sure you have plenty of tissues with you.

Now if you’ll excuse me, I have something in my eye again…