In terms of storytelling technique and character development, Luke Cage isn’t one of Marvel‘s strongest shows. Yet it is also one of the boldest and most important that Marvel has ever told.

Marvel’s movies are largely forgettable popcorn films, fun to watch but not really about anything. It’s just fun superheroes wrecking stuff for a few hours. Marvel’s Netflix shows though? They follow in the tradition of other great storytellers, using their fictional stories to highlight problems in the real world; to lie to us, to reveal a greater truth.

It began with Fisk, whose attempts to gentrify Hell’s Kitchen threatens to create thousands of new homeless people. Right now, housing prices are so out of control that even people with good jobs can’t afford to live in the area they work. Seattle, San Francisco, Vancouver, they’re all cities where gentrification has turned low income areas into luxury housing that residents can’t afford. But we don’t really think about it, at least not until we see it in the fate of fictional characters.

Jessica Jones was an incredibly dark story, because it went through great pains to show the cost of sexual violence. Kilgrave is the penultimate predator, someone who doesn’t even understand the damage he’s causing. Despite wielding incredible mind controlling powers, he insists “I never raped you!” when Jessica confronts him. And throughout the show, Jessica is constantly having to convince people of Kilgrave’s powers. Just as rape victims often have to convince law enforcement, and pretty much everyone else, that the sex wasn’t consensual.

Now we have Luke Cage and it points yet another uncomfortable microscope at a big social issue: black culture and the police (and the justice system at large).

Luke Cage celebrates black culture and that’s huge. In fact, while writing this I can’t think of a single movie I’ve seen recently that didn’t equate black culture with gangster life. Most stories featuring black protagonists are often about getting out of the ghetto, usually rejecting black culture along the way, but not Luke Cage. In fact, Luke’s love for black culture, history and music is an integral part of his character.

Loving your culture doesn’t mean accepting it wholesale of course. Luke Cage rejects destructive parts of local culture as well, such as the use of the word nigger to describe himself. He also opposes one of the main villains whose primary motivations are to “Keep Harlem Black”, an insular and destructive philosophy that seeks to segregate rather than integrate.

I love being exposed to new cultures, and when I was young I traveled the world with my parents. I was exposed to many cultures. Yet black culture, one I could experience right here at home… is one I was never really exposed to. Hip-hop, rap, black history outside the civil rights movement, and artwork. I’m ignorant of almost all of it. And seeing all this gave me a new perspective on so many things.

At one point during the show, a cop is killed and the entire Harlem police district begins harassing and even assaulting the people of Harlem. It’s a sad, and unfortunately honest look, at the kind of behavior that’s created such antagonism between black communities and the police. The trouble comes from the fact that the police district treats Harlem like a singular entity, a pulsing mass of criminal activity to be controlled and corralled. They don’t see Harlem as a community of individuals.

One cop in particular crosses the line when he beats a child trying to find Luke Cage. Yeah that’s right, the whole sad incident happens while they’re trying to wrongfully arrest the hero of the story. The police consistently hound and harass Luke Cage throughout the story. In the picture above, the police have no legal reason to stop Luke Cage as far as I can tell. He’s just out for a walk, but he’s black. And wearing a hoodie. So they stop him.

And yet as much as I have condemned the police for the various shootings that have taken place, a single line in Luke Cage made me realize…I might have reacted the exact same way.

“Who knew a black man in a hoodie could be a hero?”

When I heard that line I paused the show and tried to conjure up the image of a black man in a hoodie, and you know what I thought of? I thought of gang violence, drugs, and robberies. It’s not merely a man wearing a common garment, it’s a threat. Luke Cage asked a very uncomfortable question: if you saw Luke Cage coming down the street at you, wearing his black hoodie, how would you react?

And I was forced to answer: I would be afraid. 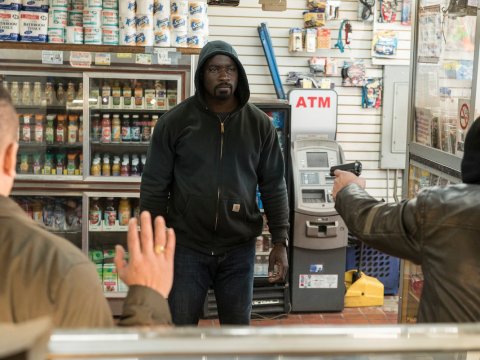 It was a startling revelation for me, because I’ve always thought of myself as welcoming and accepting of everyone regardless of race, religion, or orientation. It’s something I pride myself on. And yet when I’m forced to confront the image of a black man in a hoodie, I have a disturbingly prejudiced view. It made me examine my thinking: why does that image provoke fear? It’s a man wearing a piece of extremely common clothing, there’s nothing threatening about it. And yet, in my mind, there is.

Is it because black man in a hoodie is so ubiquitous as the bad guy in movies, TV, and video games that its simply become ingrained in my mind as the truth?  Or is it a personal failing of mine? I don’t know.

What I do know is that Marvel took that prejudice, that unfair gut reaction, and turned it into something better: a symbol. Like Superman’s blue and red underwear, Luke Cage’s black bullet-hole-ridden hoodie has become a symbol of heroism. It will be a constant reminder for me that heroes can come in any shape, form… or color.

Next time I’m walking down the street and see a black man in a hoodie, and feel that hateful prejudiced fear wrap itself around my mind, I’ll fight it. I’ll remember Luke Cage’s hoodie, and remember that piece of clothing doesn’t define the man any more than the color of the man’s skin.

Luke Cage made me examine an uncomfortable part of myself that had been hiding deep in my subconscious, and dragged it into the light for all to see. And for that alone, Luke Cage is an unqualified success as a story, despite some shortfalls in the actual telling of the story.

Ask yourself the question: if you saw this walking down the street towards you, would you be afraid? 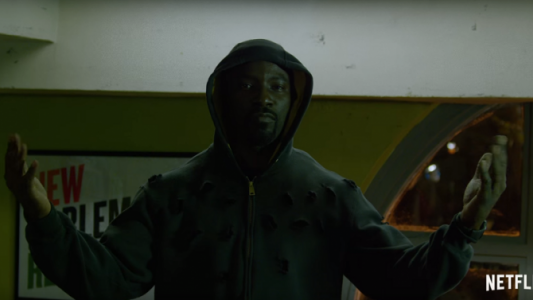 And if your answer is yes, watch Luke Cage, because if nothing else, it’ll give you a new perspective on your thinking. You might not like what you find from that perspective, but the only way to change the things you don’t like about yourself, is to confront them head on.