I’m now officially over working 6 days a week. At first it was kind of exhilarating, and as I wrote before, added momentum to my life that translated into writing more.

Now it’s just exhausting, and each week gets harder. I haven’t even played a video game in I don’t know how long, which might not be a bad thing considering the quality of games out there right now, but I really want to try out Pillars of Eternity 2. Last movie I found time for was Solo which was a full two months ago, which doesn’t even feel like that long ago because time has turned into an indistinguishable blur.

So instead of reviews, I’m just going to ramble on about writing stuff that fascinates me.

Writing is essentially lying, and just like lying, you have to keep the lie straight if you want to be believed. Mythology creep is what happens when your lie gets too outrageous.

I ran a mile yesterday.

I ran a mile yesterday in 15 minutes.

I ran two miles yesterday in 10 minutes while wearing a 50-pound backpack.

I ran two miles yesterday while wearing a 50-pound backpack and I ran faster than anyone ever has.

That’s mythology creep in a nutshell, the lie gets bigger and more outrageous with every telling, until eventually it’s just not believable anymore. This is typically a problem that pops up in stories written by multiple people. Sometimes it’s an honest mistake, like a game of telephone, where a writer simply doesn’t remember how the event was originally written. Most of the time though, it’s a deliberate choice, and often one made with the best of intentions. They want to “add to the history” or “elaborate on past events”, which are both phrases I’m sure you’ve seen thrown around by creators of prequels and origin stories.

The most famous example of this is, of course, the Midichlorians from The Phantom Menace. George Lucas wanted to elaborate more on the force, to add to the mythos, and in doing so destroyed everything that was great about it. Reducing the mystical Force, described with such simplistic beauty by Alec Guinness, and turning into some weird kind of bacterial infection was just bizarre.

Another example you might be familiar with: Cerberus from the Mass Effect series. Cerberus as presented in the original Mass Effect was a radical terrorist organization dedicated to furthering humanity’s interests at any cost. While obviously well-funded and aided by elements inside the government and military, they were a relatively small organization. By Mass Effect 3 Cerberus was a massive conglomerate with its own formidable military, both willing and able to strike hardened military targets in alien space. It unfortunately grew out of proportion to the kind of story they were telling.

Star Trek is the story I want to focus on though. Star Trek remains one of my all-time favorite show, but they also have some of the worst cases of mythology creep in the business, so I’m going to pick on them for this article.

One of my favorite episodes in The Next Generation is “The Final Mission,”  Wesley Crusher’s last episode as a regular cast member. He and Captain Picard end up stranded on a desert planet where Picard is gravely injured. Picard, believing that he will likely die before help arrives, tells Wesley about Boothby, a man he met at Starfleet Academy. When Wesley asks what subject Boothby teaches, Picard just smiles and tells Wesley that Boothby is the groundskeeper at Starfleet Academy, a man that Picard came to befriend and who obviously meant a great deal to him.

To most, a groundskeeper is invisible, part of the very landscape they’re tending. For Captain Picard to befriend this man meant that he went out of his way to do it and that said something special about Captain Picard’s character. It was also a great moment between Picard and Wesley, as Picard tries to share with Wesley something beautiful from his life in what Picard believes are his final hours. 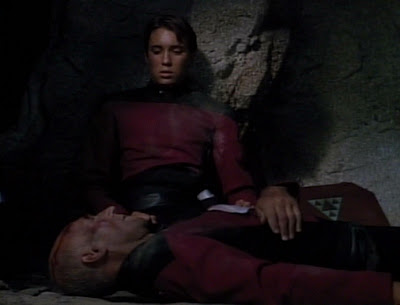 Unfortunately Voyager then rolled up and ruined everything. Boothby was turned into the mascot of Starfleet Academy with Boothby giving Captain Janeway flowers for her room and teaching Chakotay how to box. One wonders when he ever had time to actually get any gardening done when he apparently mentoring every single officer in the academy.

Another big one that always bothered me was the Battle of Setlik 3; a raid by the Cardassians against a Federation civilian outpost. This is a key battle in Chief O’Brien’s life, because it was the first time he’d ever killed a man. Now when the Chief originally tells the story, to a Cardassian visiting the Enterprise, Setlik 3 is a tiny skirmish. He describes a “squad of Cardassians” attacking a small Federation Outpost. It’s only significance was to Chief O’Brien himself, because the trauma of being forced to kill someone forever changed him. Chief O’Brien describing his experiences on Setlik 3 to a Cardassian, years later, is one of my favorite scenes and Colm Meaney’s delivery is haunting.

However in the season 5 episode of Deep Space 9, “Empok Nor”, Garak describes the battle of Setlik 3 like this:

“We all know your distinguished war record; how you led two dozen men against the Barrica encampment and took out an entire regiment of Cardassians.” – Garak to Miles O’Brien

Now I have no idea how many soldiers are in a Cardassian regiment, but in human armies a regiment can range from between 2000 and 5000 soldiers. Now my problem isn’t so much the odds against Chief O’Brien, there are historical precedents for small groups being able to rout or capture much larger forces. No, my problem is that this completely changes the story of Chief O’Brien, and not for the better.

The Battle of Setlik 3 from The Next Generation gave us the story of a young Miles O’Brien struggling to save a family, of a young kid terrified of swatting a misquito suddenly being forced to kill someone. It was a story of vulnerability, opening up to a hated enemy to tell them exactly why he hates them. It also revealed profound elements of O’Brien’s character, that beneath his easy-going demeanor, the man suffered from such overwhelming guilt that had turned into an intense hatred for the people who had forced him into killing. It was a deeply personal story that enriched the character.

Meanwhile the Battle of Setlik 3 from Deep Space 9 gives us Chief O’Brien the Hero. A larger than life character who almost single-handedly defeated an entire Cardassian Regiment and saved the entire colony from destruction. It places Chief O’Brien in the pantheon of great conqueror-heroes like Alexander the Great and Julius Caesar. Yet at the same time it doesn’t tell us anything about his character, which makes it an inferior story. Maybe, if we learned more about how that scared young kid who was horrified at killing a single person, went on to kill or capture thousands, it might have deepened the story. 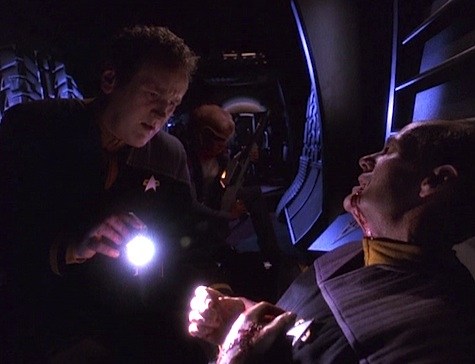 As it is though, it’s throwaway line from Garak in order to reinforce Chief O’Brien as a badass, which was completely unnecessary because the audience already knew that. It turned a complex, three-dimensional character into a caricature.

He also had his faults, he could be intrusive and a bit of a loudmouth. His vast knowledge sometimes made him come across as arrogant and aloof. He also made mistakes, missing a question on his final exam meant he didn’t make Valedictorian. Despite being highly intelligent and successful, his failure to make valedictorian was a failure Dr. Bashir couldn’t come to grips with. It was something that spoke to a deeper insecurity, the fear that he never really measured up, that he was never good enough. That made him relatable, and thus a stronger character.

But then a few seasons later, when it’s later revealed that he’s genetically engineered this whole storyline is retroactively damaged. He didn’t make a mistake on his final exam, he actively held himself back so as not to draw attention. His weekly dart games with Miles, and the charming back-and-forth between the two, was based on lies as Dr. Bahsir was intentionally losing.

And that’s the biggest problem with mythology creep, the retroactive damage it does to the much better stories that came before. It often ends making the story worse, it can cheapen and degrade the very stories that inspired someone to try expand on them. That’s not always the case of course, some prequels and origin stories are amazing. Star Wars Rebels did a great job adding to the Star Wars canon without undermining the stories that take place after. Similarly, I thought Star Wars: Rogue One was great as well.

I’d love to point out a Star Trek prequel that did this well, but, so far neither Enterprise nor Discovery have succeeded in this regard. I still need to do a proper review of Star Trek: Discovery but I have no idea when I’ll find the time to do that.